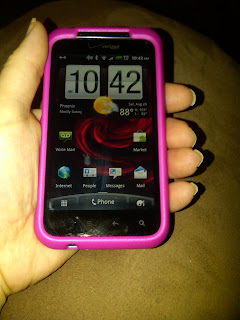 A couple of years ago, my new Blackberry Storm was one of the best smartphones on the market. (Obviously this was pre-iPhone.) Its cool features and Verizon’s buy-one-get-one-free deal hooked my husband and me into buying a pair. I’ve rued the day many times since then.

His BB Storm has served him well; mine has beaten me into the ground with its quirks. Try to take a photo: the flash goes off, but the shutter doesn’t click (sometimes). Try to open a website in the browser: you could wait for hours, and if it does eventually come up, you can’t read it on the tiny screen (most every time). Try to use the phone: the screen goes black, and all you can see is a tiny square with a revolving arrow (at the most annoying times). Try to play the highly addictive Word Mole game while your husband is sleeping beside you: the tap-tap-tap noise of the keyboard wakes him up, and he says, “Are you playing Word Mole again?” (sigh)
I’m actually on my fifth Blackberry Storm. No lie. I’ve had to send four phones back to Verizon for free replacements because one by one they have gone suddenly, irretrievably black. I’ve complained out loud so often that my husband has found himself saying the same thing over and over: “So, when are you going to [stop complaining and] get a different phone?”
My commitment to the Blackberry and to Verizon expired last April. I continued to complain; I had no excuse for not upgrading except that the pain of switching would be worse than the pain of keeping what I had. Kind of like living with a broken leg because you don’t want the doc to set it.
This week I found my courage and set my broken leg with a new Droid Incredible 2. It was smart, it was free with a 2-year commitment, and it had great reviews. I knew it wouldn’t have Word Mole but figured I could keep the Blackberry charged up for the game.
Now I’m wondering, What the heck was I thinking? This amazing new phone has become Jenny’s Enemy No. 1. Here’s why I hate it:

Yeah, I know—new technology can be hard to adopt when you’re so in tune with the old (the enemy you know intimately can be a more comfortable companion than a new friend). Give me another week or two, and I’ll eventually find a few things I like about my Droid.

The positives so far:

Do you think I could bribe the Droid programmers to make an Incredible version of Word Mole?

← How city living stacks up to country life
"Poise" vs "Posie"—or, why spelling matters →