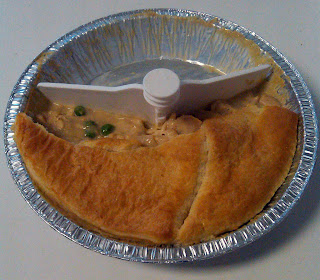 When four of us were all living in the same house, I made chicken pot pie from scratch. Everything about it was homemade, including the gravy and the pie crust. The only thing that would’ve been more authentic would be a freshly killed chicken, but I didn’t have one of those, so I bought a cheap frying chicken, dunked it in a pot of boiling water, and then spent too much time picking the meat off the bones.

Now, as the mother of grown children and the wife of a man who doesn’t eat pot pies, stews, or most anything else involving veggies, I have no one to bake that old-fashioned pot pie for, except myself. I’m not about to go to all that trouble just for me; if I’m going to do that much work, it must somehow involve chocolate. (Sorry, chicken and chocolate don’t mix.)
Yet I still crave it—the flaky crust, savory gravy, fresh-tasting vegetables, and chunks of genuine chicken. After trying various store-bought versions, I’m convinced there is no substitute for homemade.
The need: a pot pie for one. The problem: I can’t find a recipe. The solution: Create my own recipe, and make it do-able in 20 minutes instead of two hours.
I gathered a few staples from my pantry & fridge: chicken bouillon, chicken gravy powder, Heinz chicken gravy, frozen peas, fresh carrots, one small potato, Kirkland chicken, refrigerated croissants (the kind that come in a roll), and milk. Then, guessing but not measuring, I did this:
From start to finish, it took a little more than 20 minutes; it’ll be faster next time, now that I have a “recipe.”
After I realized how much I had made, I did my best to talk Scotty into sharing it with me, but he firmly maintained his “I don’t do pot pies” stance. I texted my son who lives 10 minutes away to see if his family had already had dinner; they had. So I dug in with a fork, not even bothering to scoop a serving onto a plate.
I’ll be eating it for a week, but… Yum.