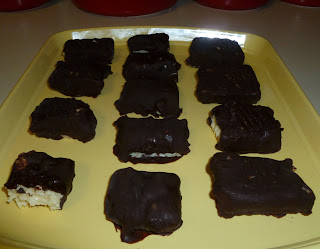 This isn’t a cooking blog, which you already know if you’ve read a few of my posts. I don’t fancy myself much of a cook, although I love to bake. Occasionally I’ll make something fun that I feel like sharing, and today is one of those times.

Fair warning: If you don’t like coconut, close this tab and come back next week, or read one of my older posts (please), because you aren’t going to like this recipe.
I like coconut a lot. Fresh & natural, flaked, sweetened, dried: you put it in front of me, I’ll eat it. I also like candy, but a coconut lover like me doesn’t have many choices when it comes to candy bars. There’s Almond Joy and there’s Mounds. And that about does it, unless you like those old-fashioned neopolitan coconut squares—you know, the ones that have a stripe of pink, white, and brown. I used to when I was a kid, before I discovered chocolate. You can include on that coconut-candy list the Idaho Spud, if you live anywhere near Idaho—it’s a chocolate and marshmallow bar rolled in coconut. Those are an acquired taste, though.
Since I like Mounds better than just about any other candy bar (Idaho Spud is a close second), I’ve often pondered the possibility of making my own. Why would I bother, when three stores with Mounds on their shelves are less than three minutes from my house? Good question. I suppose it’s because I feel slightly less “that’s bad for you, don’t eat it” guilt when I make something at home. I wouldn’t dream of buying commercially made fudge, cookies, or brownies, but if I make them at home, I feel like the work of making them cancels out the calories. Right?
Actually I have fun experimenting when I’m pretty sure the result will be yummy. I started looking through the Internet for a Mounds-type candy recipe, and wow—there were dozens. I had the ingredients for the most basic recipe on hand, so I cut the amounts in half (no need to waste good ingredients on something that might fail), left out the pecans (pecans in a Mounds?), and went to work.
Roughly twenty minutes later, my small batch of Almost-like-Mounds-only-better-and-homemade bars were going into the freezer to set up. I had tasted one and found it good, very good. Today, fresh out of the freezer, they are even better! Now I want to share…not the candy, just the recipe. (Scotty, bless his heart, had one bite and said he would resist the temptation to eat any more.) I also want to give credit to the originator of this recipe; you’ll find a link to her recipe at the bottom. If you make it, let me know how it turns out for you.

One bag chocolate chips or 10-12 oz chopped chocolate, light or dark depending on your preference

One Tbsp coconut oil or vegetable oil, or one ounce paraffin (optional—it will thin the chocolate a bit and make it more glossy and easier to dip)

Mix coconut, sugar, condensed milk, and coconut flavoring well. You may need to get your hands messy to mash it up.

Forming the filling: Roll it out into a log that you will freeze and cut into slices, or roll into small balls, or flatten to 1/2’” thick on waxed paper in a square pan. Freeze; unless you’ve formed it into individual balls, slice before dipping. Your slices can be whatever size you prefer.

Melt 12 oz chocolate chips (and the oil or paraffin, if preferred) in a bowl or glass measuring cup in the microwave for 2 minutes. Stir and nuke again for one minute if necessary. Don’t overcook, or it will burn! You’ll have to throw it out and start over.

Let the melted chocolate cool a bit before dipping the slices or balls of frozen mixture. They’ll hold up better. Dip and cool on waxed paper. These keep well in the freezer and taste great frozen; the chocolate will be hard, but the inside will be soft. Best refrigerated, because at room temp, the chocolate will be messy. Keep napkins handy!

Note: This recipe is half the normal amount you’ll find on the Internet. Double everything, and you’ll have enough for a large plate for your holiday party, or to snack on from your freezer.

Suggestion: Use the rest of the sweetened condensed milk to make half a batch of fudge. Who needs a whole batch? Just mix in 12 oz. of chocolate chips, a tsp. of vanilla, and a pinch of salt; microwave a minute or two; pour in a pan and let harden.

← Who Drinks Coffee in the Desert?
Coach’s Oats No-bake Cookies →