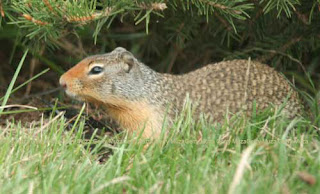 I took a walk in our field the other day and had a hard time not falling into a hole. Or rather, 285 holes. Our 15 verdant, productive acres of alfalfa have been invaded by ground squirrels who have dug in like an army of determined dough boys in the trenches of WWI. Stealthy but not silent, their strident, incessant “peep peep peep, cheep cheep cheep” disturbs the peace and calm we took for granted when my late husband and I moved to this farming area near Mt. Spokane. We used to sit outside and enjoy the calls of birds and the breeze whispering through the maple leaves. Who can hear anything now above all this squirrel chatter?

Don’t go feeling sorry for them, any more than you’d pity rats in your basement. Ground squirrels are dirty little varmints that tunnel underground like prairie dogs, living and breeding in huge colonies. Their most active season is late spring through mid-summer, when at any given time I can look out and see dozens of heads popping up from their holes. They feed on plants and plant roots, and since their favorite habitat is open grasslands, this makes them a prime consumer and destroyer of hay fields. They’re as determined and nearly as indestructible as the aforementioned army; they’ve pitted my alfalfa field with moon-like craters so abundant you can’t take ten steps without breaking an ankle in one.
It’s legal to “control” ground squirrels when they’re destroying crops, but “ground squirrel control measures” are a joke. Back when I was young and optimistic, I found what I thought was the ultimate weapon: extra-large, heavy-duty squirrel bombs that looked like smallish sticks of dynamite. I had to travel 30 miles to Deer Park to buy them at a feed store because they weren’t legal in Spokane County.
I bought what I thought was a large enough supply to take down every ground squirrel within five miles, and then some. Back home, I filled my son’s red wagon with squirrel bombs, newspapers, and matches. With a shovel over my shoulder, I pulled the wagon into the field and began my campaign against the enemy. The process went something like this: Dig, dig, dig up a squirrel hole. Crumple up newspapers. Shove a bomb down the hole as far as possible and light it. Quickly stuff newspapers over the bomb, then backfill with dirt. See drifts of white smoke coming from other holes. See squirrels popping up and laughing.
I must’ve spent hundreds of dollars on those bombs. I never saw one squirrel keel over. So Farmer K., who rents our field and cuts the alfalfa, brought in the definitive answer: a mega-gasser that he ran from his tractor. Soon the furry little devils would be heading for prairie dog heaven (or hell), and the field would be saved from destruction. Or not. Farmer K. did his best, but a week later, there were as many heads as ever; perhaps more, as if there were a Baby Boom generation reproducing at a rate fast enough to completely overwhelm squirrel Social Security.
If you don’t like hunting and have a fundamental disagreement with shooting anything that’s alive, please don’t read on. Because the sure-fire way of reducing the squirrel population turned out to be .22 rifles, those low-powered little can-poppers used for target shooting. Our lawn-care specialist, a local teenager we trust, offered to bring over a couple of buddies and do some shooting. Soon there were three teenagers wearing cowboy hats and carrying guns, ready to address our problem John Wayne-style.
The boys spent a couple of hours picking off their targets, keeping score of the ones they could see falling on the field of battle. Others, they were sure, descended to the depths of the earth to expire. This hunting party was followed by another made up of neighbors who had a vested interest in stopping the problem before it spread to their fields, and again, they kept count of the fallen. Over the next three weeks, the total was closing in on 50, then 100, then 125 – outrageous, unbelievable numbers that were backed up by the cessation of the head-popping and the incessant “peep peep peep, cheep cheep cheep” of previous weeks.
Soon after the last hunting party left, the weather took a turn into the dog days of summer. Extreme heat drove the remaining squirrels underground for estivation, which is kind of the hot-weather form of hibernation. It’s fall now, and we haven’t heard a peep or seen a head since July. Have we won the battle or simply a skirmish? Next spring, as the weather warms, we’ll once more sit on our deck and listen for the telltale sounds of WWI returning. Then we’ll either muster the troops or sigh in relief at a war well fought.
P.S. I wrote this last September, and the squirrels are taunting us again, but we’ve had relatives, neighbors, friends, and teenagers out shooting. Even my husband, the same man who captured a fly alive, took it to the door, and released it, saying, “There you go, little buddy.” When Scott gets mad enough to shoot at living things, you know they’re in big trouble.

← Maverick Madness
Who Drinks Coffee in the Desert? →