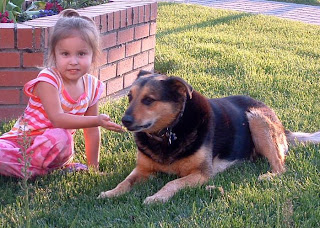 We used to have a dog who was outdoors all the time, feared nothing, played hard, and slept happily in the garage. We now have a dog – the same dog – who scratches and whines to be indoors, who is afraid of most everything, who is sacked out much of the time, and who insists on sleeping in the house at night.

What changed Maverick into Marley? Age, mostly, but also thunderstorms. When he was still young, Maverick was playing in the neighbor’s yard when a thunderstorm hit. He took off running and turned up, the next day, 8 miles from our house. In his panic he had run over the top of the nearby hills and down the other side.

In the intervening years, every thunderstorm sent him into a frantic episode of chewing (gates, fences, door frames, screen doors, or whatever kept him away from us at the time), pacing, whining, and shaking. That is, if he wasn’t running for his life. We “lost” him several times and had to go retrieve him from wherever he’d run to. One night Scott and I held him, or tried to, while his tranquilizers took effect, but he was so panicked that he ran right over the top of us and butted his head against the bedroom door, trying to escape – who knows why or where.

Maverick is nearly 13 years old now, and he turned deaf about a year ago. He seemed to ignore last season’s thunderstorms, so we thought those episodes were over. Whew! No more chewing, running, or freaking out.

Then a few weeks ago, while my grown sons were here to witness it, Maverick went ballistic on our side porch. He chewed chunks of wood off the newly fixed door frame (we had it repaired because we thought he was over that manic phase) and banged his body repeatedly against the door. We let him inside, gave him tranqs, and waited while he calmed down. A couple of nights ago it happened again – we got our first indication there was a t-storm in the distance when we heard Maverick banging the door. More chunks of the door frame were lying on the porch. Later he nearly chewed his way out of a dog-proof crate. It’s amazing the dog has any teeth left.

I get so mad at Maverick when he’s destructive that I forget what he really is inside: a frightened little boy who wants his mommy because he doesn’t know what’s going on, and he doesn’t understand that the loud noises and flashes of light won’t hurt him, as long as we’re with him. He can’t help doing what he does, and no amount of scolding will stop him from doing it again.

So we’re at the point of asking how much trouble we’re willing to put up with while Maverick lives out his last years. We could say he’s had a good, long life, have him put down, and be done with it, but that’s the coward’s way out. The door frame is fixable (again); nights of lost sleep are redeemable; and the aggravation of dealing with panic attacks is manageable. We have an obligation to the old boy, just as we would to any other family member who loses his mind under circumstances he doesn’t understand and can’t control.

That reminds me – Honey, if someday I’m reduced to chewing, whining, and freaking out uncontrollably, please keep me.

← 10 Things I Like About Mom
The War Against the Squirrels →