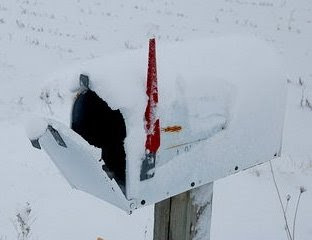 Did you ever talk someone into doing something and then feel really stupid when it backfired on you?

Yesterday I decided Scott and I needed to walk half a mile to our mailbox and back. We’ve done this a few times lately, and it’s felt good to get out in the fresh air. Plus I’ve turned into Jabbette the Hut over the winter months, so I NEED to walk.

I pulled my husband off the oh-so-comfortable couch, purring and persuading and cajoling. “Pleeeeeease? Take a walk with me, it’ll be fun.”

Being a gentleman who can’t refuse his lady anything she really wants, but complaining under his breath that it was too darn cold, he arose and reached into the closet for a coat. This action was significant, because Scott doesn’t wear coats, even during winter. “Too warm,” he says. But he took a look outside, told me I was nuts, and put on his heaviest jacket.

I, being uncharacteristically optimistic, told him it was a beautiful April afternoon and no, the rain wouldn’t catch us, and those clouds didn’t look at all threatening, and did he want a hat? He declined.

We walked the quarter mile toward our mailbox, feeling the wind at our backs, and Scott (who is an optimist’s optimist) declared that it was freezing, I was crazy, and wasn’t that rain hitting his head?

I, in my stocking cap and heavy winter coat, declared that I was quite comfortable, haha, and why didn’t he wear a hat?

When we reached the mailbox and turned around, it was as if we had been magically, cruelly transported to the Arctic. This wasn’t a warm, spring rain stinging our faces; it was driving snow! And the wind that had gently pressed against our backs was now biting our cheeks and reddening our ears. Mother Nature had pulled the ultimate April Fool’s joke and pinned us down in a springtime blizzard.

Through chattering teeth, my kind and loving husband stated that there was no longer any doubt: I was, indeed, crazy, and he would be happy to hold this walk against me for quite a long time. I asked him if he’d like to jog to warm up, and he reminded me that the titanium in his knee joint had already frozen and, if jarred, would explode into shards like in that Terminator movie. Once we got home and slammed the door on the snowstorm, it took an hour before we were truly warm again.

Today when I asked him if he wanted to take a walk, I half expected him to turn me over his knee and spank me. But he simply said, “Sure, Honey, just give me a few minutes.” And now I can’t find him anywhere. Was that a car I heard driving down the road?