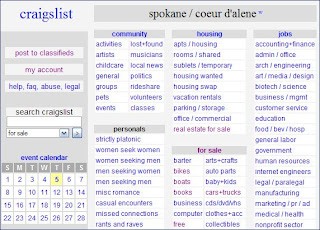 When you sell stuff on craigslist, you meet a lot of nice people. This isn’t anonymous eBay, where you mail things to New York. This is real life, in your face, actual people coming to your house.

The other day a sweet college girl picked up a small desk, thrilled to find something she could afford. A young couple driving a brand-new pickup bought our unused twin bed for their little girl, proclaiming it “perfect!” Another young couple in a very old truck took away a free pile of plastic gardening pots for their garden to feed hungry families. A kid gratefully hauled off our scraps of Trex lumber to build shelves in his workshop.

Then there was the family who pulled up in a van to buy a pair of doors for $20. The doors had languished quite a while unsold, so I was happy to have a buyer. A man came to the door, well-dressed in a shabby kind of way. He probably looked older than he really was because his shoulders were stooped, as if he were carrying a great weight.

A young man got out of the van to help get the doors. I heard a baby crying, and a girl in the back seat, who looked no older than 18, asked for warm water to fill the baby’s bottle. While we were loading the doors, the older man said something about the baby’s health problems – a cleft lip, hospitalization. He paid me, and the older woman in the front seat rolled down her window and called out, “Thank you SO much for selling us these!”

I was struck by this little family’s quiet air of dignity and desperation. I took the man’s money but regretted it as soon as they left. As I explained to Scotty, they seemed to really need it, but I didn’t think fast enough to give it back. Scotty had the same thought I did: email them and offer to return their money.

The mom, who had emailed me about the doors, thanked me for offering their $20 back but said not to feel obligated. I insisted – I explained that God had laid it on my heart, it wasn’t my idea. She gave in, and that’s when I heard the rest of the story.

The family of four was actually a family of at least 10 – the older man and woman were husband and wife, and they had one child of their own and seven that were adopted. The seven had been removed from their birth home because of abuse and starvation, and now this couple were struggling to feed and care for them all. Medical problems and a lack of insurance had stretched them to the limit.

Sandy had indeed reached the point of desperation, but, she said, “I just think you ought to know how you have blessed me in my feeling that my prayers were not being heard, and realising now that they must be.”

I’ve gathered some stuff for them – extras from our pantry, a box of food from the Union Gospel Mission, our old baby crib, high chair, and playpen. It will help, temporarily. I worry about what they’ll do when this food is gone. But God calls us to help where and when He needs us to. For now, this is the help we can offer, and we’ll continue to pray for Sandy and her family. Would you pray too?

← Got Wench?
So there was this guy singing, see… →