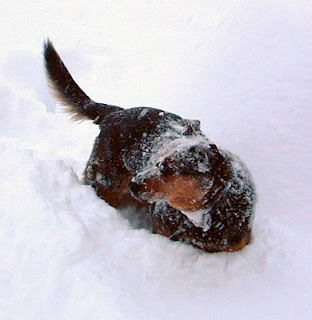 We got dumped on here in Spokane, Wash., with almost two feet of new snow in a little more than a day. I want out. Right now, I want out. I want to live somewhere greener and warmer. Not too warm, like Phoenix or LA, just warmer than zero degrees with a wind chill of minus 20. You know, like Portland or Seattle – okay, they got snow and cold today too, but it’s still about 20 degrees warmer there than here.

Warmer would definitely be better for our critters. You can see from this pic that our dog, Maverick, didn’t know what he was getting into when he rushed past me out the door this morning. We could trace his journey out to the field for his pit stop by the trail he plowed. Poor old guy, he’s past 12 and arthritic, so it’s a wonder he even made it home.

As for Snickers, that barn cat has decided being inside isn’t so bad. When the temps went lower than 15 and we brought him in the house, he haunted the doorway, waiting for a chance to dash outside, back to what was familiar to him: his heating pad in the garage. Three days later he’s sleeping on our bed and following us around the house like a puppy. When the door opens, he yawns and turns away. Smart cat.

Maverick and Snickers are lucky. They don’t have the drudgery of back-breaking shoveling or the worry that the power will go out and we’ll be stranded with no water, no heat, no lights, and busted pipes. They don’t have to get the sprinkler system blown out or scrape car windows or agonize over Christmas presents that will be mailed too late because we couldn’t get to the post office.

They don’t have to stand in a three-foot drift and extend a golf-ball-getter to its full length to scrape snow off a satellite dish that’s 12 feet off the ground. Neither do they have the joy of bribing the neighbor who owns a tractor to plow our driveway (as always, the promise of an apple pie worked its magic – we love our neighbors). The critters just sleep and eat and do that other thing you have to clean up after.

I used to like that song from The Sound of Music, the one that goes, “Snowflakes that stay on my nose and eyelashes, silver-white winters that melt into springs…” Now I realize these are a few of my un-favorite things. These are things I won’t miss about living in Spokane when, someday, I do not.

Or, to quote a character on tonight’s episode of The Office, “One day we’re going to move to Disney’s Celebration Village in Florida and leave all of this behind.” Want to come along?