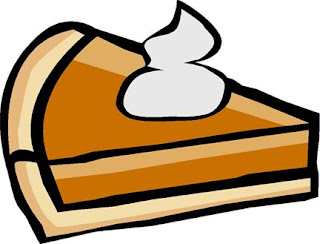 I failed the holiday acid test. Thanksgiving Day was PP-Day: it was high time for me make my first pumpkin pie, especially since it was on my husband’s “it isn’t Thanksgiving without it” list.

I already had an apple pie and a chocolate cream pie sitting on the counter – sure things I’d made many times. I pulled out the recipe for pumpkin pie and found it required two eggs. Oh no. I had just used my second-to-last egg in the pie crust recipe, so I was down to one egg in the carton.

There was no way I was going to drive 22 miles round-trip to the nearest little neighborhood market on the chance they’d 1) be open and 2) have eggs. No worries, I reassured myself. I’d just flip open my laptop and Google a one-egg pumpkin pie recipe.

Good idea, but no luck – every recipe started at two eggs and worked up to six, depending on the fat & calories one desired in their pie. So out the window went the pumpkin pie for Thanksgiving. I was appalled by my lack of planning, but my gracious and understanding husband said it was fine, two pies of the non-pumpkin variety were plenty.

So Sunday (yesterday) rolled around, and I removed my homemade, waiting-for-pumpkin pie shell from the freezer. I had a full carton of eggs, my son and his special girl were coming over, and pie would be had. Pumpkin pie.

As the guests were arriving, I emptied out the can of pumpkin into a bowl and snipped off the recipe on the back. I couldn’t read the micro-sized type, so after a failed attempt to blow it up on the copier (which just made it fuzzy), or decipher it with reading glasses (which weren’t powerful enough), I peered through a magnifying glass and found, to my horror, that the Libby’s recipe required a 12-oz can of evaporated milk.

I usually read through recipes first, but not this time. I had every ingredient mixed and waiting except the canned evaporated milk. I went to the basement, where I have a pantry that would feed the whole neighborhood during a six-month siege – but no evaporated milk.

I did have just over one cup of heavy cream. My son’s special girl, who is in her second year of studying culinary arts, agreed that maybe I could substitute it for the evaporated milk. My thought process went like this: evaporated milk is like double-strength milk, and heavy cream is, well, rich and creamy. There was no way I was going to drive 22 miles round-trip to the nearest little neighborhood market for a can of evaporated milk. So why not try? All I had to lose was a homemade pie crust, some inexpensive ingredients, and my reputation as a pie-maker.

I baked the pie per instructions, which seemed kind of odd: a few minutes at 450, and quite a while at 350, then test the middle with a sharp knife. The pie took longer to set than it should have, and both my boy and his girl refused to try it (neither one is a pumpkin pie fan, so I can’t blame them; I would’ve declined too).

My husband galantly stepped up and tasted a still-warm piece slathered in enough Cool Whip to drown out the flavor. The pie was lighter colored than the pies I remembered from family Thanksgivings, but Scotty pronounced it “very good!” And he wasn’t just humoring me. He asked for another piece. I then tried my second piece of pumpkin pie ever (my first was a commercially baked “sugar free” pie), again with the Cool Whip. Dang tasty. I don’t want another piece, and it’ll never be something I make because I enjoy it, but I would’ve been proud to serve it.

Next year at Thanksgiving, I’ll keep the heavy cream handy. Because everybody needs a secret ingredient.

← Two Years of Laughing
Why I’ve Decided to Go Gray →