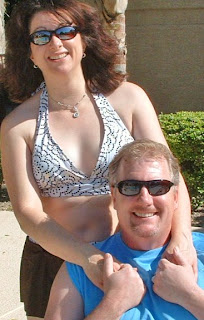 I had never laughed as much or as hard as I have in the past two years. Actually two years, four months, seven days – since the day Scotty came into my life. November 11 marked our second wedding anniversary, and although there are many things I adore about this man, I think the laughter he’s brought into my life is one of the most precious.

We have fun, and that’s something that was in short supply during the previous 25 years. Life was pretty serious then. Now I have a life companion who knows how to be both silly and serious, goofy and gracious, knowledgeable and knee-slapping. I’m a lot of those things too, but they were hidden, and he’s brought them out in me in a new way. I can really be me and he can really be him, and together we’re just plain weird. We have to tone it down around normal people.

Now that’s pretty sappy, isn’t it. But it’s the truth – we have fun in our mutual goofiness. Happy anniversary to us.

← What Is the Value of Pie?
Disaster Averted, Pumpkin Pie Triumphs →