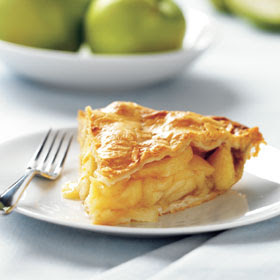 I’m not afraid to bake a pie. I’ve heard rumors there are women who are afraid to try because they’re intimidated by the intricate process of crust making, or they’ve failed to make a perfect crust in the past. Being afraid is far different from being satisfied with the fake, store-bought pies from the bakery. Fear I can understand; I’m scared of souffles and any kind of dough that has to be kneaded (doesn’t everyone want to be kneaded?). But take heart if you’re among the piecrust-fearful; it’s worth it to keep trying.

I wouldn’t eat pie when I was a kid. The mixture of flavors and textures wasn’t appealing, so I just ate the plain apples or the cherries on their own. Chocolate pie was the exception, because I can’t resist chocolate in most any form and because Mom made it from scratch, producing a dessert with a perfectly flaky crust, richly flavorful chocolate pudding filling, and real vanilla-flavored whipped cream on top. Nobody could resist Mom’s chocolate pie.

I don’t remember the first time I actually made an apple pie, but I think it was the day my mother-in-law asked me to bring a pumpkin pie to a family gathering – Thanksgiving, probably. I disliked pumpkin pie even more than apple pie, and I couldn’t stand the thought of contributing something I so detested.

After I convinced her that apple pie was a better choice, I decided to bake instead of buy, for two reasons: thrift and tradition. In my family, one never, simply never, bought a pie of any kind. The closest bakery was at least 12 miles away, and besides, pie making was an art practiced and perfected among my maternal ancestors. If I couldn’t make my own pie, I wasn’t my mother’s daughter or my Grammie’s granddaughter. No pressure from them of course; this was all my own delusion. Back then I was still adventuresome in the kitchen and didn’t realize so many things can go wrong with a pie: dough that tore apart when rolled, a tough crust, tasteless filling, burnt edges, chewy fruit instead of tender.

I called my mother for her recipe. She lived too far away to come and help me, although kind as she is, she probably would have made the 300-mile drive. She let me in on a secret: her renowned piecrust had two special ingredients – vinegar and egg. This combo made the dough practically fool-proof, which was perfect for a young and foolish wannabe baker like me. I rolled up my sleeves, put on one of those fru-fru aprons, and baked my first apple pie.

If you’re expecting a disaster story, forget it; although I hated the floury, sticky mess that was left to clean up, my pie was good enough to please not only my former m-i-l but also her whole family. They were easy to please, not having a lot of experience with homemade pie. Their bakery was only three blocks away, and they weren’t much into baking. And so I became the family’s designated pie baker, which was fine with me because my only other choice was “designated potato salad maker,” and I detested potato salad. I’ve still never made one and I’m pushing 50.

But I did eventually taste my own pie, because I figured “just once” wouldn’t kill me, and I fell in like. When you spend at least an hour creating a dessert, it’s practically sinful to let other people eat all of it. Apple pie still isn’t my favorite dessert (that title is permanently reserved for something with chocolate in it), but I always enjoy at least one piece, warm from the oven with vanilla ice cream melting down the sides. What I value even more is the look on Scott’s face and his “Ahhh…” after the first bite. You’ll never get that satiated look or that satisfied sound by serving a store-bought pie.

Over the almost 30 years since unveiling my first pie, I’ve worked to perfect my own recipe. Experimenting with a combo of apple varieties, a dash of other spices along with cinnamon, chilled dough, and a few other tricks are making it a little better each time. It’s one of my favorite things to do on a fall afternoon, especially when I’ve picked too many apples to fit in the fridge. They have to go somewhere, and there’s no better place than in a homemade piecrust. The bounty of this year’s crop of Jonathans, Romes, and Golden Delicious is sitting on our side porch in plastic bags, waiting to be peeled, wedged, cored, and sliced.

A fresh, homemade apple pie is such a treasure to certain friends that they’ll take them in exchange for doing things like looking after our cat and gathering our mail while we’re out of town. They’d do these things anyway, but the pies are a sight more welcome than a thank-you note. We have a friend who shoveled our long, steep driveway after a heavy snow; we offered to pay him for his three hours of bone-chilling work that left him looking like Jack Frost. All he wanted was an apple pie.

I do have a pie-related goal, or perhaps it’s a pie-fear to overcome: making a pumpkin pie once in my life that will make Scott go “Ahh…” I won’t eat it – that’s too big a goal. Well, maybe I’ll try it. Just once won’t kill me.

← Love the Apples, Hate the Hassle
Two Years of Laughing →