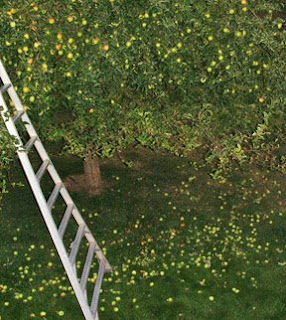 The apples on one of our trees needed to be thinned. Overburdened limbs were bending in sweeping arcs, a sure sign we’d be hearing the “crack” of breaking branches if nothing was done about it. Being a good soldier, albeit a late one, since optimum thinning time was two months ago, I hauled out the 12-foot orchard ladder and thinned. The good news is, I didn’t fall off the ladder. Being a worrier, I’m always pretty sure I’ll fall off eventually, but it didn’t happen today.

The hobby orchardist – a title I’m qualified to claim, since I own no less than seven apple trees, a real three-legged orchard ladder, and two genuine antique canvas picking bags – starts working in the late winter. Before the tree buds out, it has to have a haircut. All those long, sprangly, straight-up growths from the previous year have to be whacked off. One semi-dwarf tree can produce half a truckload of water sprouts, as they’re called. Imagine what’s left lying on the lawn under seven trees. And you can’t leave ’em lying there, so if you don’t have a wood chipper, you either take them to the Waste-to-Energy Recycling Center (the dump), or you pile them up in your field and burn them.

Ever tried to burn green branches in damp weather? Last time I tried it, there were three of us pouring gasoline on the pile, poking lit newspapers under the pile, and generally doing everything to the pile but lighting it with dynamite. A year later the pile was still there. That was the year I got smart and hired a service to prune the trees and haul off the trimmings, including last year’s, which by that time were nicely dried and would have made a great bonfire.

Springtime, when young hearts should be celebrating love and bunnies and all that, is the season of spraying. If you don’t want nasty greenish worms in your lovely fruit, you must spray. Not once, not twice, but every few weeks for four months. For years, I tried to do it myself. I didn’t have commercial equipment, just a thingamajig on the end of a hose, filled with chemicals I measured and mixed myself. I looked pretty goofy wearing coveralls, goggles, and a face mask. I could never get the spray high enough to treat all the limbs, and I was so worn out after spraying a couple of times I quit. Let the worms do their worst; I could eat around them.

I finally got even smarter and paid the chem-lawn service to spray the trees. It’s expensive, and it only kind of works; they come out to spray three or four times, which really isn’t enough. They spray all the trees, whether or not they have any fruit this year. So maybe it’s not so smart, but it gets done, and I don’t have to do it.

The thinning I mentioned earlier? That should be done after the little apples start to form, oh, about May or early June. Theoretically you pick off all but a few fruits on each branch or you risk two things: a tree that loses limbs and no crop at all the next year. Both have happened to my trees. Did I learn? Guess not. I was out there thinning apples the size of baseballs tonight. I worked for an hour on one side of one tree and left hundreds of apples on the ground. It hurt me to waste those beautiful, promising little green apples. I left far more on the tree than I should have, and I may pay for it when the apples grow heavier.

At least I don’t have to worry about picking up the fallen apples. By tomorrow morning every single one will be gone, along with all the leaves I accidentally tore off. I have an army at hand, and they muster quickly when the apple trees are bearing. Feathered, quilled, and antlered, they are out there right now in the twilight, starting their feast. No, the apples won’t go to waste. All my labor this evening will plump up some hungry animals who are facing a cold winter. And that’s a very good thing.