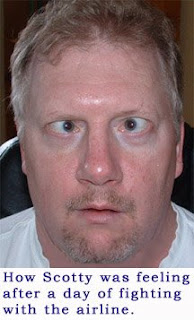 I drove my husband to the airport at 6 a.m. I drove back to pick him up at 7:30. We drove out to the airport again this afternoon. All those trips to the airport, and he still didn’t make it from Spokane to Montreal. But he did triumph over the airline system.

We knew something was wrong when he didn’t get an email confirmation of his e-ticket so he could check in online. I tried to look him up with his United Mileage Plus information; as usual, I couldn’t get in. And his confirmation number plus last name didn’t get me anywhere. Weird. That had always worked before.

I had called United last week to bump his seats up to Economy Plus, and they found him, so we thought he would be able to check in at the airport. We rolled in a little late – about 45 minutes before his flight instead of the “required” two hours – but pretty confident that he’d be fine, as he had no luggage to check. Well, he was confident; I’m always petrified something will go wrong. And today, it did. Hah! I was right.

I dropped him off and heard this story later. He checked in at the ticket counter and found that his reservation was under “Martes” not Mertes. He might have tried to skate through on a normal, U.S.-only flight, but not on an international one. He didn’t want to get stuck at Customs going in or out, with a ticket that didn’t match his passport. So he asked the ticket agent to change his name, and she just stamped his ticket and told him to go on through. “It’ll be fine,” she said. My husband was skeptical, but he tried. Of course the TSA agent stopped him and sent him back to ticketing.

Again, the ticket agent insisted he’d be fine. Again, TSA wouldn’t let him through until the ticket agent promised he could get reticketed at the gate. Again, my husband didn’t believe her, but what could he do? He followed the accommodating and sympathetic TSA agent (who told him “She’s done this four times this morning and we’re really upset with her”) back to the gate, where the gate agent looked at him like he was nuts. “We don’t do ticketing at the gate.” Right. And back my husband went to the ticket agent.

Long story short – the flight left without him. The ticket agent refused to issue him a receipt showing his name spelled correctly. She said she couldn’t issue anything with his correct name until he bought another ticket. So he came home, frustrated and angry with the airline system, but mostly with the agent herself. He couldn’t reticket at the airport because he didn’t know when his boss would want him to reschedule.

Once he called the office and got a new date for his trip, I got on the phone with United. I expected to just change up his ticket, and gosh, was I wrong. Half an hour on the phone with United, and I was as upset as my husband. The news was bad: the problem with Scott’s name being misspelled was being tied to his Mileage Plus account, which they said had shown his name as “Martes” not “Mertes” since the 1990s. Neither of us believed that, since he’s flown on United many times without running into this issue. What I do remember is talking very slowly and clearly to the foreign-sounding agent when I first made Scott’s reservations for Montreal: “M-MARY. E-EDWARD. R-RAYMOND…” You get the picture. Apparently she thought that was “A-ADWARD.”

The call to United this afternoon left us reeling, because there was simply nothing they could do for us until we got the Mileage Plus mess straightened out. Until then, that $977 ticket was useless. And the price for a new ticket had gone up to $1,800, which we’d have to pay for immediately, since we had no credit coming anytime soon from the old ticket. Oh, and don’t forget the $150 change fee, and the $98 for Economy Plus seats that we’d have to buy again. No refunds there.

The agent on the phone gave us a slim hope that we could get a better outcome by going back to the airport. Great, another 44-mile roundtrip on the off chance the same agent would be there (apparently that was a requirement). But we decided to try.

When we arrived at the United counter, we found one female and one male agent and no customers. We had their total attention. While I stood by for moral support, my knees shaking because I hate, absolutely hate, confrontations, Scott stepped up and told the woman his story. He told it with feeling and emotion; I could almost see her mascara run. This woman wasn’t the agent from earlier in the day, which turned out to be a good thing. She had a kind heart and some authority, or perhaps she got the power to help us from the guy next to her. They worked our case together.

Twenty minutes later, we walked out with new tickets for the exact day Scott needed to go back and ZERO fees. In other words, instead of an extra $1100 (if our current ticket had had any value), we traded his tickets straight across. This just does not happen. It simply doesn’t. I knew if anyone could make a miracle happen at that airline counter, Scott could; he’s a likeable, nice, friendly guy, and he got through to a couple of people by appealing to them kind of like Princess Leia did in Star Wars: “Help me Obi Wan Kenobi, you’re my only hope.”

So Scott has his tickets to fly out next Sunday, and my Jedi and I have a few extra days at home together. Montreal will keep. All is well.

← What I Want to Know
Love the Apples, Hate the Hassle →